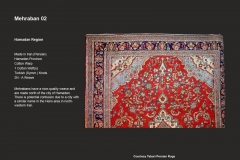 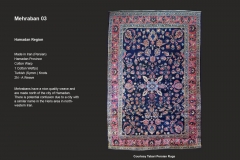 The Khorasan province is an important rug producing region. Its name is used interchangeably with Mashad. Mashad holds a religious significance in Iran. Mashad may use Kerman- or Tabriz-like designs. Rugs from this area may be woven using a Turkish or Persian knot, but it is mainly Persian. Like Kermans, the reds and blue colors used have a bluish tint.

Mayghon is located near Arak in the Markazi province.

Maymeh is a few miles from Josheghan, located north of the city of Esfahan. Many rugs are woven with a recognizable repeated diamond geometric design like Josheghan.

Mazlaqon is a village west of Saveh in the Markazi province. The medallion designs sometimes have a sawtooth-style border around them.

Mehrabans have a nice-quality weave and are made north of the city of Hamadan. There is potential confusion due to a city with a similar name in the Heris area in northwestern Iran.

Mehraban (Mehravan) is a city close to the city of Heris in northwestern Iran. There is potential confusion with Mehraban rugs woven in the Hamadan province. Goravan, Bakhshayesh, Heris, Serapi, and Mehraban (Mehravan) have the same type of weave. Two identical pieces of weft strings are used each row. One row runs both strings on top of each other as one straight weft. The next row uses one string as the straight weft and the second string as the alternate sinuous “second” weft and so on.