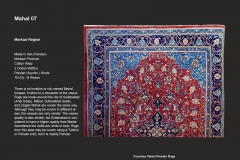 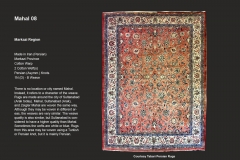 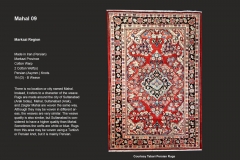 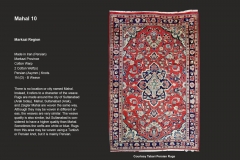 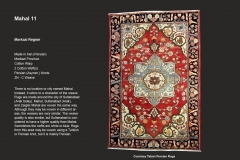 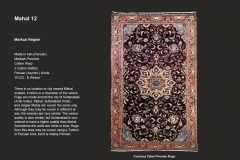 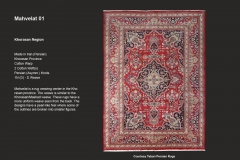 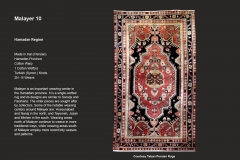 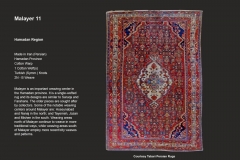 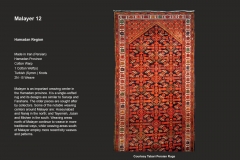 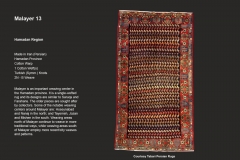 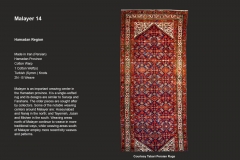 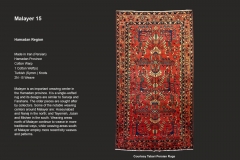 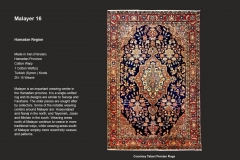 There is no location or city named Mahal. Instead, it refers to a character of the weave. Rugs are made around the city of Sultanabad (Arak today). Mahal, Sultanabad (Arak), and Zeigler Mahal are woven the same way. Although they may be woven in different areas, the weaves are very similar. The weave quality is also similar, but Sultanabad is considered to have a higher quality than Mahal. Sometimes the wefts are white or blue. Rugs from this area may be woven using a Turkish or Persian knot, but it is mainly Persian.

Mahvelat is a rug weaving center in the Khorasan province. The weave is similar to the Khorasan/Mashad weave. These rugs have a more uniform weave seen from the back. The designs have a pearl-like feel where some of the outlines are broken into smaller figures.

Malayer is an important weaving center in the Hamadan province. It is a single-wefted rug and its designs are similar to Saruqs and Farahans. The older pieces are sought after by collectors. Some of the notable weaving centers around Malayer are: Hoseynabad and Nanaj in the north; and Tayemeh, Jozan and Mishen in the south. Weaving areas north of Malayer continue to weave in more traditional ways, while weaving areas south of Malayer employ more recent/city weaves and patterns.