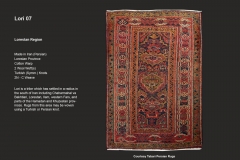 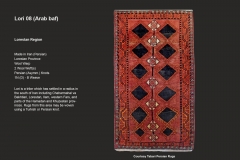 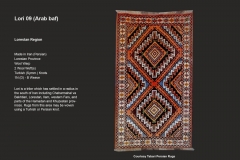 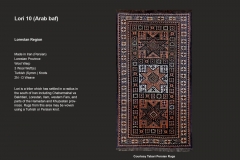 Some nice rugs using the Kerman-type design and weave have been labeled as Kermanshah – which is misleading. Rugs made in Kermanshah were Kurdish, they use wool warp and are coarsely woven and have not been as popular and prolific.

KhalKhal is located south of the city of Ardabil. Today in Iran, fine silk pieces are being woven in city of KhalKhal.

Khoy is located in the Azarbaijan province. Although the weave is similar to Tabriz, some designs are non-geometric interpretations of the Heris design.

A Kurdish tribe (semi-nomadic) located in the Kermanshah province, west of the city of Hamadan . These rugs are traded in the city of Sonqor.

The Kurds are an ethnic group who live north to southwest of Iran that borders eastern Turkey, northern Iraq, and the southern part of the Caucasus. Many have settled and some are still nomadic. There are a variety of rugs which are mostly wool warp and have been influenced by the regions they live in.

Lilians are woven in southern Arak. The designs are similar to some Saruqs. It also has a soft feel and sheen.

Lori is a tribe which has settled in a radius in the south of Iran including Chaharmahal va Bakhtiari, Lorestan, Ilam, western Fars, and parts of the Hamadan and Khuzestan provinces. Rugs from this area may be woven using a Turkish or Persian knot.