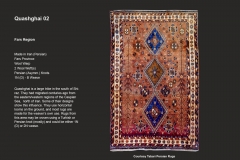 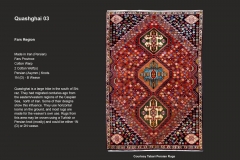 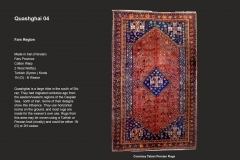 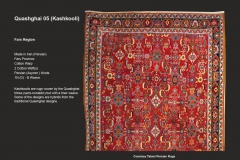 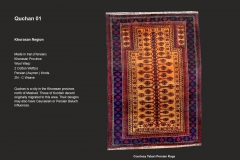 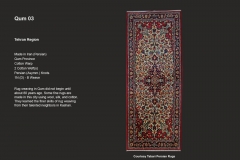 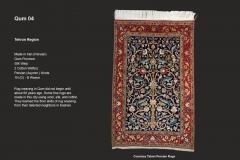 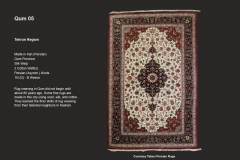 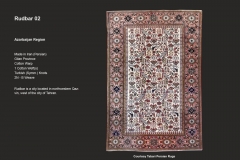 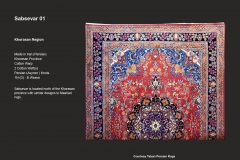 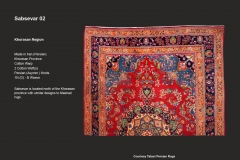 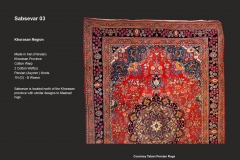 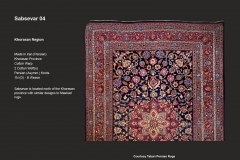 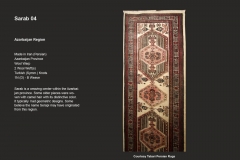 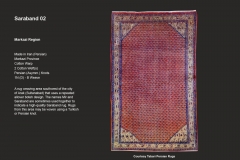 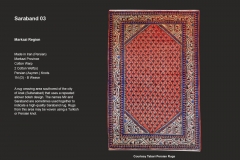 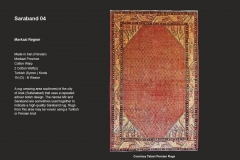 Quashghai is a large tribe in the south of Shiraz. They had migrated centuries ago from the eastern/western regions of the Caspian Sea, north of Iran. Some of their designs show this influence. They use horizontal looms on the ground, and most rugs are made for the weaver’s own use. Rugs from this area may be woven using a Turkish or Persian knot (mostly) and could be either 1N (D) or 2N weave.

Kashkoolis are rugs woven by the Quashghai tribes (semi-nomadic) but with a finer weave. Some of the designs are hybrids from the traditional Quashghai designs.

Quchan is a city in the Khorasan province, north of Mashad. Those of Kurdish decent originally migrated to this area. Their designs may also have Caucasian or Persian Baluch influences.

Rug weaving in Qum did not begin until about 80 years ago. Some fine rugs are made in this city using wool, silk, and cotton. They learned the finer skills of rug weaving from their talented neighbors in Kashan.

Rudbar is a city located in northwestern Qazvin, west of the city of Tehran.

Sabsevar is located north of the Khorasan province with similar designs to Mashad rugs.

Sarab is a weaving center within the Azarbaijan province. Some older pieces were woven with camel hair with its distinctive color. It typically had geometric designs. Some believe the name Serapi may have originated from this region.

A rug weaving area southwest of the city of Arak (Sultanabad) that uses a repeated allover boteh design. The names Mir and Saraband are sometimes used together to indicate a high-quality Saraband rug. Rugs from this area may be woven using a Turkish or Persian knot.