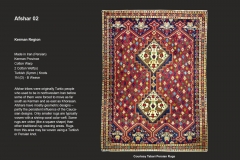 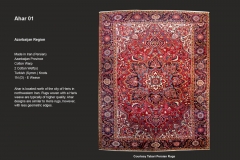 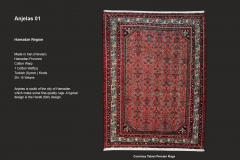 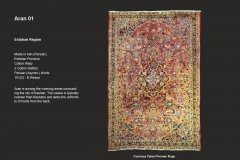 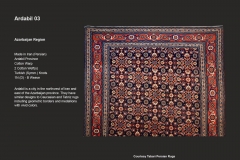 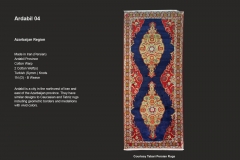 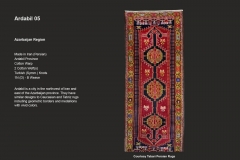 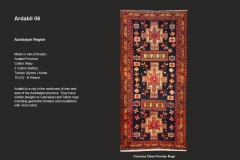 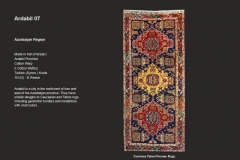 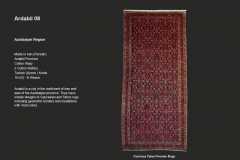 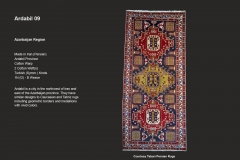 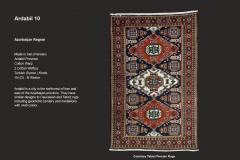 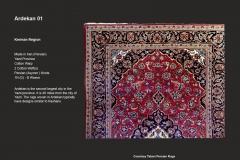 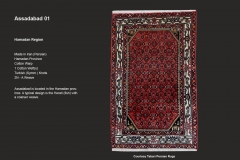 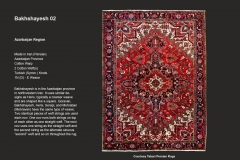 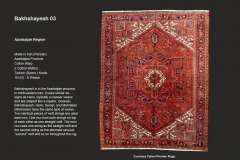 Afshar tribes were originally Turkic people who used to be in northwestern Iran before some of them were forced to move as far south as Kerman and as east as Khorasan. Afshars have mostly geometric designs – partly the persistent influence of the Caucasian designs. Only smaller rugs are typically woven with a shrimp-coral color weft. Some rugs are wider (like a square shape) than other traditional rug weaving areas. Rugs from this area may be woven using a Turkish or Persian knot.

Ahar is located north of the city of Heris in northwestern Iran. Rugs woven with a Heris weave are typically of higher quality. Ahar designs are similar to Heris rugs, however, with less geometric edges.

Anjelas is south of the city of Hamadan which make some fine-quality rugs. A typical design is the Herati (fish) design.

Aran is among the weaving areas surrounding the city of Kashan. The weave is typically coarser than Kashans and lacks the uniformity of knots from the back.

Ardabil is a city in the northwest of Iran and east of the Azarbaijan province. They have similar designs to Caucasian and Tabriz rugs including geometric borders and medallions with vivid colors.

Ardekan is the second largest city in the Yazd province. It is 40 miles from the city of Yazd. The rugs woven in Ardekan typically have designs similar to Kashans.

Assadabad is located in the Hamadan province. A typical design is the Herati (fish) with a coarser weave.

Bakhshayesh is in the Azarbaijan province in northwestern Iran. It uses similar designs as Heris, typically a coarser weave and are shaped like a square. Goravan, Bakhshayesh, Heris, Serapi, and Mehraban (Mehravan) have the same type of weave. Two identical pieces of weft strings are used each row. One row runs both strings on top of each other as one straight weft. The next row uses one string as the straight weft and the second string as the alternate sinuous “second” weft and so on throughout the rug.